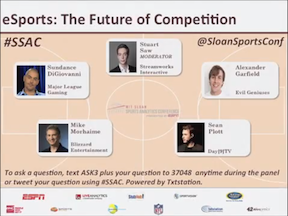 When I was finishing up my book on e-sports (Raising the Stakes, just released from MIT Press) I wrote that it felt a bit odd to be spending all this time talking about professional computer game play amidst the rise of the Wii and Facebook games. Though I’d started my fieldwork on professional e-sports in the early 2000’s, a kind of heyday for the scene, by the time I was wrapping up the manuscript the future was very uncertain. There had been some major shake-ups and while there were signs on the horizon of things that might re-energize enthusiasts (SC2, fighting games), I was pretty unsure where e-sports was headed.

Jump forward to March 3rd of this year, day two of the MIT Sloan Sports Analytics Conference (hello moneyball), and the panel entitled “E-Sports: The Future of Competition.” Go figure. The line-up was sharp, and telling. It was great to see them use an insider to chair the panel, Stewart Saw (long-time e-sports commentator known as “TosspoT” to the community). Panelists were Alex Garfield (CEO of the team Evil Geniuses), Sundance DiGiovanni  (one of the founders, and CEO of, Major League Gaming), Sean Plott (popular e-sports commentator known as Day[9] to his fans), and Mike Morhaime (co-founder and CEO of Blizzard – you know, that little company whose titles have sucked up more eyeball hours than anyone may care to calculate). You may note I didn’t lead with Morhaime’s name, despite his being the only one you perhaps recognize. Even though Blizzard’s titles are prime drivers of a major part of e-sports, much of what is brewing right now and propelling things forward is happening well beyond the game companies. (The big omission on the panel imo was probably Justin Kan of Twitch TV but I’ll save that for another post.)

There’s a lot packed into that video and I encourage you to check it out. It’s an interesting peek into how e-sports experts explain to an audience that may not know anything about the scene – but a hell of a lot about sports – exactly what is happening in pro-gaming. A few things that really caught my ear:

Okay, it’s probably too easy to say it was great to hear this conversation because it intersects many themes I’ve long been interested in for my research into pro-gaming. But hey, I’m saying it. Well worth checking out the video.

i think he imagines he’s hiding 😆😍