Watch Me Play: Twitch and the Rise of Game Live Streaming (Princeton, 2018)

Visit watchmeplay.cc for more info and link to the free Creative Commons version. 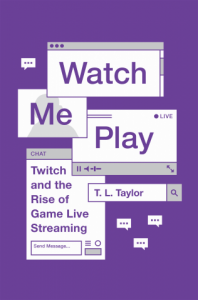 Every day thousands of people broadcast their gaming live to audiences over the internet using popular sites such as Twitch, which reaches more than one hundred million viewers a month. In these new platforms for interactive entertainment, big esports events featuring digital game competitors live stream globally, and audiences can interact with broadcasters—and each other—through chat in real time. What are the ramifications of this exploding online industry? Taking readers inside home studios and backstage at large esports events, Watch Me Play investigates the rise of game live streaming and how it is poised to alter how we understand media and audiences.

Through extensive interviews and immersion in this gaming scene, T. L. Taylor delves into the inner workings of the live streaming platform Twitch. From branding to business practices, she shows the pleasures and work involved in this broadcasting activity, as well as the management and governance of game live streaming and its hosting communities. At a time when gaming is being reinvented through social media, the potential of an ever-growing audience is transforming user-generated content and alternative distribution methods. These changes will challenge the meaning of ownership and intellectual property and open the way to new forms of creativity.

The first book to explore the online phenomenon Twitch and live streaming games, Watch Me Play offers a vibrant look at the melding of private play and public entertainment.

“This is one of those rare and valuable books that offers an in-depth evaluation of a specific phenomenon, while also being relevant well beyond that one case.”—Hargittai and Miscione, International Journal of Communication.

“[Taylor’s] work expertly builds a historical framework for Twitch and outlines how patterns of behavior have evolved on the platform without overcommitting to any last-word assessments of its influence [and] also demonstrates how invigorating academic scholarship can be when it tries to tackle a subject still in formation.”—Jacob Merten, The Velvet Light Trap

“[W]ell worth reading. . . [A] timely, wide-ranging introduction to, immersion in, and analysis of, Twitch and game live streaming.”—Helle Breth Klausen, MedieKultur

Raising the Stakes: E-sports and the Professionalization of Computer Gaming (MIT Press, 2012)

“Competitive video and computer game play is nothing new: the documentary King of Kong memorably portrays a Donkey Kong player’s attempts to achieve the all-time highest score; the television show Starcade (1982–1984) featured competitions among arcade game players; and first-person shooter games of the 1990s became multiplayer through network play. A new development in the world of digital gaming, however, is the emergence of professional computer game play, complete with star players, team owners, tournaments, sponsorships, and spectators. In Raising the Stakes, T. L. Taylor explores the emerging scene of professional computer gaming and the accompanying efforts to make a sport out of this form of play.

In the course of her explorations, Taylor travels to tournaments, including the World Cyber Games Grand Finals (which considers itself the computer gaming equivalent of the Olympics), and interviews participants from players to broadcasters. She examines pro-gaming, with its highly paid players, play-by-play broadcasts, and mass audience; discusses whether or not e-sports should even be considered sports; traces the player’s path from amateur to professional (and how a hobby becomes work); and describes the importance of leagues, teams, owners, organizers, referees, sponsors, and fans in shaping the structure and culture of pro-gaming.

Taylor connects professional computer gaming to broader issues: our notions of play, work, and sport; the nature of spectatorship; the influence of money on sports. And she examines the ongoing struggle over the gendered construction of play through the lens of male-dominated pro-gaming. Ultimately, the evolution of professional computer gaming illuminates the contemporary struggle to convert playful passions into serious play.”

“Taylor has given us a great account of an exciting part of gaming culture.”— Faltin Karlsen, Times Higher Education

“While Raising the Stakes fits neatly within the gaming studies or media studies genres, it is also an exciting and novel contribution to the growing body of work in what might be termed global technology studies.”— Jenna Burrell, Contemporary Sociology

“Raising the Stakes is a must not only for game studies but also media and internet studies researchers as a wonderfully nuanced study of century-first digital play-based in DIY, grassroots ideology-in the face of burgeoning leisure commercialization. Play on.”— Larissa Hjorth, Game Studies

“Esports is a fascinating collision of new technology and culture with traditional sports structure, and is a phenomenon that could only happen in the present. There is a growing body of research around the growing esports phenomenon, and this book provides a great primer into the academic perspective on the emerging culture. In my opinion, this is the book to refer anyone to who is interested in understanding esports—for both newcomers and veterans.”—Timothy Young, Day9 website

“Taylor’s book is a valuable piece of scholarship that lays the groundwork for further investigation into all aspects of video games as sport and players as athletes.”—Steve Jacobs, American Journal of Play.

Ethnography and Virtual Worlds: A Handbook of Method (Princeton, 2012)

“Ethnography and Virtual Worlds [co-authored with Tom Boellstorff, Bonnie Nardi, and Celia Pearce] is the only book of its kind–a concise, comprehensive, and practical guide for students, teachers, designers, and scholars interested in using ethnographic methods to study online virtual worlds, including both game and nongame environments. Written by leading ethnographers of virtual worlds, and focusing on the key method of participant observation, the book provides invaluable advice, tips, guidelines, and principles to aid researchers through every stage of a project, from choosing an online fieldsite to writing and publishing the results.

“[W]e can hope that young scholars and established ones, friends and critics of ethnography alike, will read this book, take it seriously, and carry it with them in whatever world they study and inhabit.” — Jack David Eller, Anthropology Review

“In this useful volume, the coauthors, each of whom is an accomplished virtual world ethnographer, pretty much put to rest threshold questions that might be raised about whether virtual worlds and online cultures can be proper objects of anthropological research. . . . [T]he authors provide as much insight and instructive commentary about traditional ethnography as they do about the ethnography of virtual worlds.” — Choice

“[The authors] have produced a very interesting and timely contribution; clearly written, with easy-to-follow case studies. . . . Ethnography and Virtual Worlds will be useful to any graduate student in social sciences, but as well in humanities, media and Cultural Studies or in any interdisciplinary approach focused on virtual worlds. It is not an introduction to ethnography as such, rather a helpful guide to help scholars already familiar with ethnography and related methodologies to adapt their approaches to cases using the Internet and interactive virtual worlds.” — Yves Laberge, LSE Review of Books 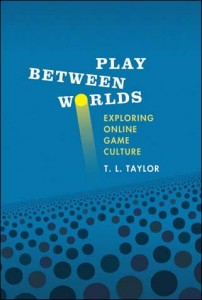 “In Play Between Worlds, T. L. Taylor examines multiplayer gaming life as it is lived on the borders, in the gaps, as players slip in and out of complex social networks that cross online and offline space. Taylor questions the common assumption that playing computer games is an isolating and alienating activity indulged in by solitary teenage boys. Massively multiplayer online games (MMOGs), in which thousands of players participate in a virtual game world in real time, are in fact actively designed for sociability. Games like the popular Everquest, she argues, are fundamentally social spaces.

Taylor’s detailed look at Everquest offers a snapshot of multiplayer culture. Drawing on her own experience as an Everquest player (as a female Gnome Necromancer), including her attendance at an Everquest Fan Faire, with its blurring of online-and offline life, and extensive research, Taylor not only shows us something about games but raises broader cultural issues. She considers “power gamers,” who play in ways that seem closer to work, and examines our underlying notions of what constitutes play, and why play sometimes feels like work and may even be painful, repetitive, and boring. She looks at the women who play Everquest and finds they don’t fit the narrow stereotype of women gamers, which may cast into doubt our standardized and preconceived ideas of femininity. And she explores the questions of who owns game space, what happens when emergent player culture confronts the major corporation behind the game.”

“A fascinating peek into the formal and social architecture that undergirds and shapes the cultural phenomena that is EverQuest.”— Jane C. Park, New Media and Society

“The intertwining of online and offline identities is complex but Taylor’s nuanced scholarship and vivid descriptions provides one a full-immersion in the virtual world of EverQuest and reaps rewards from close association with the players and their social networks.” — John F. Barber, Leonardo

“This book will undoubtedly serve as a landmark in game studies not only because of its rich and insightful scholarship, but also because of its deeply personal and reflective nature.” — Douglas Thomas, Cinema Journal